While EPIC has written about renewable energy credits in California in the past, this constitutes the first of a series of blog posts related to renewable energy credits and carbon offsets in order to update and highlight their use in one or more policy mechanisms, including local and regional climate action plans, to reduce greenhouse gas emissions. The posts will discuss the following topics:

In this post, I will focus on defining RECs and carbon offsets with an overview of their role.

What are Renewable Energy Credits?

The legal definition of a REC, according to California Public Utilities Code §399.12[h](1), is:

“…a certificate of proof, issued through the accounting system established by the Energy Commission…that one unit of electricity was generated and delivered by an eligible renewable energy resource.”[1]

RECs may be traded between entities in order to comply with renewable energy statutes, such as the California Renewable Portfolio Standard (RPS) or other green-energy mandates. There are three basic types of transactions involving RECs: bundled, unbundled, and tradable. In a bundled transaction, an entity has opted to purchase both the RECs and their associated electricity. Conversely, an unbundled transaction involves an entity that has chosen to only purchase RECs, thus nullifying the electricity that generated the RECs. A tradable transaction is similar to an unbundled transaction in that the purchase is made solely for RECs, but then the RECs may be traded to multiple participants before being ultimately used for RPS compliance or retired. Tradable RECs are also referred to as “TRECs.”

Since 2007, the Western Renewable Energy Generation Information System (WREGIS) has tracked REC generation in the Western region of the U.S. Tracking systems such as WREGIS assign each REC a unique identification number, which matches an individual REC to its current owner. Alternatively, third-party audits can identify the contractual chain of ownership between multiple parties.[2] 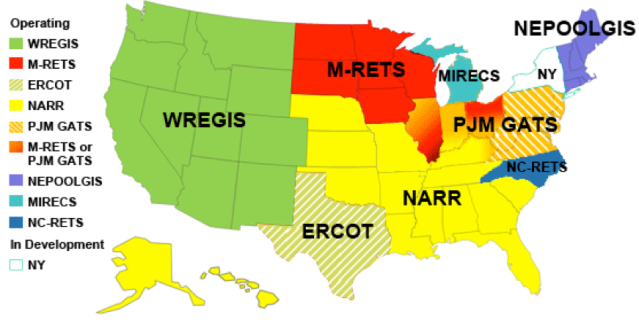 Since 2008, RECs procured through unbundled or tradable transactions had not been considered eligible to be retired for RPS compliance. In other words, utilities were previously forced to purchase renewable energy and RECs together in bundled transactions if they wished to use the traded RECs for RPS compliance. As of a 2011 decision, however, large investor-owned utilities (IOUs, including Pacific Gas & Electric, Southern California Edison, and San Diego Gas & Electric) and all electric service providers (ESPs) can meet their annual RPS compliance targets with TRECs, procured through tradable transactions. In addition, the CPUC has established some limits on which RECs can be traded, as well as some usage limits and banking rules.

RECs and Cap and Trade

RECs may also be used to a limited extent for California’s Cap and Trade program, which requires covered entities to reduce GHG emissions annually. For this purpose, entities are given annual allowances of carbon, which they may emit. If they emit less, they may sell the excess. If they emit more, they must purchase credits to be compliant. Covered entities trade amongst themselves but may also purchase limited credits outside of the covered system. In order to purchase credits for the purpose of the cap and trade program, the ARB has a Voluntary Renewable Electricity Program that allows voluntary renewable energy, therefore RECs, to be converted to GHG equivalents and used as credits for GHG reduction, and then retired in order to meet the goals of the entity’s GHG cap.

While the generation of RECs is fossil-fuel free, the electricity they offset is not currently GHG-free. In a hypothetical example, if the purchase of 1 KWh of GHG-free electricity is offsetting a supply that is normally powered purely by coal, with a hypothetical grid electricity emission factor of 1000 grams CO2e/KWh, then that purchase offsets 1000 grams CO2e. In the place of purchase and use of the electricity, the REC will be “nullifying” the emissions associated with the grid emission factor normally in use there. In the ARB’s Cap and Trade Voluntary Renewable Electricity Program, ARB explains how it calculates the GHG emissions that are offset upon purchase of a REC, namely by multiplying the amount of electricity purchased by the emission factor of the grid which the now “null” electricity feeds into. The default emission factor for the calculation is 0.428 metric tons carbon dioxide equivalent per Megawatt -Hour (943 pounds CO2e/MWh). The GHG emissions that are offset are converted to allowances that will be retired in the Cap and Trade Program.

Because GHG impacts are not location-specific, where the GHG reduction occurs is not important, and can be accounted for at some level, even if not local.

What are carbon offset credits?

Carbon offset credits, or offsets, are certificates of proof that a project reduced greenhouse gases in a manner which would not have naturally or otherwise occurred. Typically, one carbon offset credit represents one metric ton of avoided or reduced carbon emissions. Procuring or purchasing carbon offset credits can help individuals, firms, or governments lower their carbon footprint. Carbon offset credits are distinguishable from renewable energy credits (RECs) in two primary ways: carbon offset credits do not have to originate from renewable energy generation and their primary purpose is to quantify avoided or reduced carbon emissions. While RECs may also contain information on the carbon emissions that were avoided from their procurement, they can only be produced from eligible renewable energy generation. Eligibility is defined by the program that requires it, such as the California RPS described above, and can vary across states with geographical eligibility requirements as well as technology specific requirements. Similar to RECs, in the carbon offset market, carbon offsets can occur anywhere but credit for producing those will go to those who pay for its use even if elsewhere. The location of the actual GHG reduction is not important in the overall effects on the climate.

Carbon offsets can be bought and sold voluntarily or used by businesses and governments to comply with cap-and-trade programs and greenhouse gas emission targets. Voluntary and compliance offsets both represent reduced carbon emissions, but standards for compliance offsets are typically more stringent. An example of a voluntary carbon offset scheme is a program launched by the San Diego International Airport that enables travellers to offset the “environmental impact of their journey”, including of greenhouse gases.

The primary compliance role that carbon offsets possess in California is in the California cap-and-trade program. This program, administered by the California Air Resources Board (ARB), allows a small percentage of a covered entity’s emissions to be covered by carbon offset credits rather than carbon allowances. Carbon allowances are traded amongst the sectors that are capped, whereas carbon offsets occur outside of the covered sectors. The ARB has developed Compliance Offset Protocols that may be used to generate ARB offset credits. In addition, the ARB has also approved the Climate Action Reserve (CAR), American Carbon Registry (ACR), and Verified Carbon Standard (VCS) to issue early action offset credits that may be converted to ARB offset credits after submission to the ARB for consideration.[5]

More information on the roles of carbon offset credits in voluntary and compliance markets in California can be found in the blog post to follow, “The Role of Renewable Energy Credits (RECs) and Carbon Offset Credits in California.”

[1] http://www.leginfo.ca.gov/cgi-bin/displaycode?section=puc&group=00001-01000&file=399.11-399.32 This definition was unchanged in CPUC Decision 11-12-052, December 15, 2011, as per Section 3.5.3.The California Renewable Portfolio Standard (RPS), the Mandatory Greenhouse Gas Reporting Standards and the California Cap and Trade Program adopt this same definition. A REC, which is a certificate of environmental attributes, does not reduced capped emissions, therefore, may not be used for capped GHG emissions reduction purposes.

[2] http://www.epa.gov/greenpower/documents/gpp_basics-recs.pdf (website is no longer accessible, try to find another source)

Dr. Nilmini Silva-Send is EPIC’s Assistant Director, Adjunct Professor, and the C. Hugh Friedman Fellow in Energy Law and Policy. She leads the regional and local climate change projects and has extensive policy and technical knowledge about energy and GHG mitigation methods and measures. She has participated in several international energy policy dialogues, including in Mexico and Saudi Arabia. Dr. Silva-Send has been a co-Principal Investigator in a recent multidisciplinary National Science Foundation funded climate education project in which she worked with climate scientists, social psychologists and communication specialists to develop more effective methods to communicate links between climate science, energy use and society. During her career Dr. Silva-Send has conducted legal and technical analysis of environmental laws in Europe and the U.S., and carried out environmental due diligence assessments in Europe. She has also taught upper level and graduate level international law courses in Germany and since 2004 at the University of San Diego School of Law, where from 2009 she developed and teaches a contemporary course in International Energy Law. Dr. Silva-Send has a B.S. in Chemistry and a PhD in International Law and Policy. She is a member of the International Bar Association.
View all posts by Dr. Nilmini Silva-Send →
This entry was posted in Energy, Greenhouse Gas, Legislation, Renewable Energy, Uncategorized and tagged CAFE, California, Carbon Credits, Carbon Dioxide, Carbon Offsets, climate planning, Electricity, Emission Factor, Energy, Greenhouse Gas, Renewable, Renewable Energy Credits, Voluntary Renewable Electricity, WREGIS. Bookmark the permalink.