COPs and CAPs: Goals for stabilization of carbon emissions

The COP21 talks and events started on Monday November 30, 2015. Though California is not a nation, and therefore not a member of the UNFCCC, there are 8 California lawmakers accompanying Governor Brown to the Conference. While the US government, along with 20 other nations, launched Mission Innovation with a coalition of 20 billionaires, pledging to double R&D investment in the next five years into renewable energy, negotiators started the difficult job of drafting an agreement text for signature next week.

Article 3 (mitigation) of the negotiation text provides 3 options for a collective long-term goal:

[Parties aim [to achieve the global temperature goal], in accordance with the best available science [and the principles of the Convention], through [long-term global [low-[carbon][emission] transformation][[climate][carbon] neutrality]], [and peaking their [net] emissions] [by 2030][20XX][as soon as possible], [with a [x]40-[y]70% net emission reduction below 2010 levels by 2050][according to the global carbon budget distribution based on climate justice], and [overall reductions][[net] zero emissions] [over the course of the century][by 2050][by 2100].]

[Parties aim to reach long-term global low-emission transformation, in the context of sustainable development and equitable access to atmospheric space {placeholder for further elaboration of the context, including CBDR, comprehensiveness, distribution of global carbon budget based on climate justice and etc.}.]

[In pursuit of the objective of the Convention set out in its Article 2,][and][to achieve the long-term temperature goal set out in Article 2 of this Agreement,] Parties aim to reach [by X date] [as soon as possible] [a peaking of global greenhouse gas emissions] [and rapid reductions of global greenhouse gas emissions thereafter to at least] [40-70] [70-95] per cent below 2010 levels by 2050] [and zero net greenhouse gas emissions in the period 2060 – 2080] [[bearing in mind that peaking will vary for different countries and will be longer for developing countries] [[and] bearing in mind social and economic development and poverty eradication are the first and overriding priorities of developing country Parties]][[in pursuing [decarbonisation of the global economy over the course of this century] [global low – carbon transformation] [global low-emission transformation]] [in the sharing of the remaining global emission budget]].

Ignoring Option 2 (yet to be elaborated), the other two options conceptually provide the following as goals:

For the moment, there are no definitions of these concepts in the negotiating text. Some concepts have been defined elsewhere by other authoritative agencies. For example, “Global carbon neutrality means that, globally, anthropogenic carbon dioxide emissions are net zero. ​ Net zero implies that some remaining carbon dioxide emissions could be compensated by the same amount of carbon dioxide uptake (negative emissions), as long as the net input of carbon dioxide to the atmosphere due to human activities is zero.” (UNEP GAP report 2014). Peaking net emissions means emissions need to reach a maximum before they decline. In its Intended Nationally Determined Contribution (INDC), China, for example, has pledged to peak emissions by 2027. The 40-70% net reduction below 2010 by 2050 or 2100 comes from the IPCC 2014 report that states that to limit warming to 2 degrees Celsius, emissions must fall to zero between 2040 and 2070 and then fall to near or below zero in 2100. The US has pledged to reduce emissions by 26% to 28% in 2025 below a 2005 baseline while India has pledged a 33-35% reduction in emissions intensity by 2030 compared to 2005 levels.

While negotiators strive to agree on a common global goal, we turn to our state, our counties and our cities to see what targets are being adopted in climate action plans. As described in my previous post about the role of cities in achieving GHG reduction, cities that are part of several possible multi-city entities, such as C40 and most recently, the Compact of Mayors, commit (pledge) to reduce emissions beyond national and state reductions. By committing to the Compact of Mayors, for example, more than 228 cities around the world have committed (pledged) to undertake transparent, target and data-driven approaches to reduce city-level emissions, lower climate change risk and work to complement national and international efforts. In the US, the member city of Boston has adopted targets of 25% below 2005 by 2020 and 80% below 2005 by 2050. The city of Atlanta adopted targets of 20% below 2009 by 2020 and 40% below 2009 by 2030.

In California, climate action plans are driven by the state’s mandatory overall target of achieving 1990 levels by the state by 2020 as well as by the need to mitigate greenhouse gas (GHG) emissions from future development under California’s Environmental Quality Act (CEQA) for every project at every level – city, county, and state. The state provides some guidance as to what this overall target means for cities, in the Scoping Plan of 2008, with a recommendation for cities to achieve a 15% reduction by 2020 compared with “current levels”. Which year close to 2008 is chosen as baseline for the 2020 target is likely not significant especially in the long term. However, court cases, such as Sierra Club v County of San Diego (2014) and Cleveland National Forest v SANDAG (2014) have pointed to the need to be consistent with the state’s long range GHG emissions reduction targets, aligned with the scientific requirement for climate stabilization. 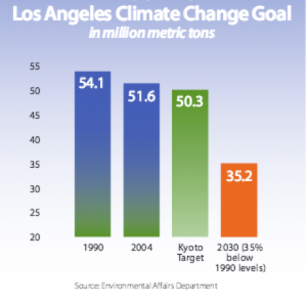 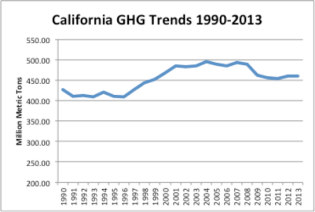 Regardless of what targets and baseline years cities have chosen, important for local and global discussion is that all these city and county-level actions taken together are committing to greater GHG reductions than nations alone are pledging through their INDCs (see last post). What exactly do local pledges in local CAPs consist of? California’s system of local government is divided between the state, counties and cities. Municipalities have powers defined by the state government code and have their own governing structure, with a mayor or city manager and broad revenue-generating authority. While counties are subdivisions of the state, and generally lack powers of self-government, like cities, counties can make and enforce local ordinances that do not conflict with the state’s general laws. Where areas are not incorporated into a city or town, the county acts as the government to provide police, parks, streets, land use regulation, zoning and waste disposal.

Therefore cities and counties have powers over parks, streets, buildings, land use, water use and waste disposal. In these areas of local concern, CAPs and components of GHG reduction measures incorporated into general plans are making significant changes to local policies.

Types of policies in City CAPs

Examples of measures from across recent California CAPs in place or pending are as follows:

Without enforceable measures, INDC reductions, just like CAP measures, remain but pledges. As such, INDCs require a system of checks and reviews to verify that implementation leads to GHG reductions. Similarly, city CAPs need implementation actions, compliance and enforcement mechanisms, and a tracking system to monitor the effectiveness of policies to achieve the target reductions.

Dr. Nilmini Silva-Send is EPIC’s Assistant Director, Adjunct Professor, and the C. Hugh Friedman Fellow in Energy Law and Policy. She leads the regional and local climate change projects and has extensive policy and technical knowledge about energy and GHG mitigation methods and measures. She has participated in several international energy policy dialogues, including in Mexico and Saudi Arabia. Dr. Silva-Send has been a co-Principal Investigator in a recent multidisciplinary National Science Foundation funded climate education project in which she worked with climate scientists, social psychologists and communication specialists to develop more effective methods to communicate links between climate science, energy use and society. During her career Dr. Silva-Send has conducted legal and technical analysis of environmental laws in Europe and the U.S., and carried out environmental due diligence assessments in Europe. She has also taught upper level and graduate level international law courses in Germany and since 2004 at the University of San Diego School of Law, where from 2009 she developed and teaches a contemporary course in International Energy Law. Dr. Silva-Send has a B.S. in Chemistry and a PhD in International Law and Policy. She is a member of the International Bar Association.
View all posts by Dr. Nilmini Silva-Send →
This entry was posted in CEQA, Energy, Greenhouse Gas, Renewable Energy, Transportation, Uncategorized and tagged AB 32, CAPs, cities and cimate action plans, Climate Action Plans, climate planning, COP21, GHGs, greenhouse gases. Bookmark the permalink.

1 Response to COPs and CAPs: Goals for stabilization of carbon emissions