INDCs and Why Cities are Important for Global Climate Action

As we approach UNFCCC’s 21st session of the Conference of Parties (COP 21) to take place November 30 – December 11 in Paris, expectations are high that more than 190 nations will be able to come to some kind of new binding agreement to reduce greenhouse gas emissions after 2020. In preparation for Paris, by decisions 1/CP.19 and 1/CP.20, it was agreed to invite all 195 members of the UNFCCC to submit their “pledges”, now known as Intended Nationally Determined Contributions (INDCs), by October 1, 2015. The INDCs can be considered Climate Action Plans (CAPs) on the grand, national level. As suggested by 1/CP.20 para. 15, INDCs may provide quantifiable information on a reference point such as a base year, scope and coverage, assumptions and methodological approaches, reductions, and show how the Party considers its INDC fair and ambitious towards achieving the objective of the Convention as set out in Article 2 of the UNFCCC. Article 2 states that “[t]he ultimate objective of this Convention… is to achieve…stabilization of greenhouse gas concentrations in the atmosphere at a level that would prevent dangerous anthropogenic interference with the climate system… within a time frame sufficient to allow ecosystems to adapt naturally to climate change, to ensure that food production is not threatened and to enable economic development to proceed in a sustainable manner.”

Within the context of Article 2 and an understanding of what is expected from INDCs as expressed by 1/CP.20, the US INDC, for example, shows what the US intends to achieve, by when, and how. The US INDC has a target of 26-28% reduction below 2005 in 2025. The US intends to achieve this target through fuel economy standards, energy efficiency standards, the phase out of high Global Warming Potential (GWP) gases, the clean power plan reductions from electricity production, and U.S. Environmental Protection Agency (EPA) standards to be implemented for landfill and oil-and-gas sector methane emissions. The implementation of some of these policies requires action by states, such as through the Clean Power Plan. Other regulations, such as fuel economy standards, do not require action by subnational entities and benefits merely accrue to all subnational entities.

The U.S. INDC’s fossil fuel greenhouse gas reductions from policy projections are based on projections from EIA’s Annual Energy Outlook 2015, which in turn includes some state regulations in place as of December 2014. However, for states, only non-discretionary regulations and targets with established enforcement provisions or established state funding mechanisms, such as California’s 33% RPS, the Low Carbon Fuel Standard, the Cap and Trade program under AB32, the Low Emissions Vehicle Program as it stood in August 2005, are included within the national submission. Discretionary or incentive-based regulations are not included in INDCs. In addition, city actions embodied in city CAPs are not part of the INDCs.

What then is the GHG gap between the INDC reductions and the global target? Several studies have added up INDC’s submitted by October 1 2015 for GHG reductions from147 nations and there is still a large gap that needs to be closed in order to reach an acceptable level (Figure 1). 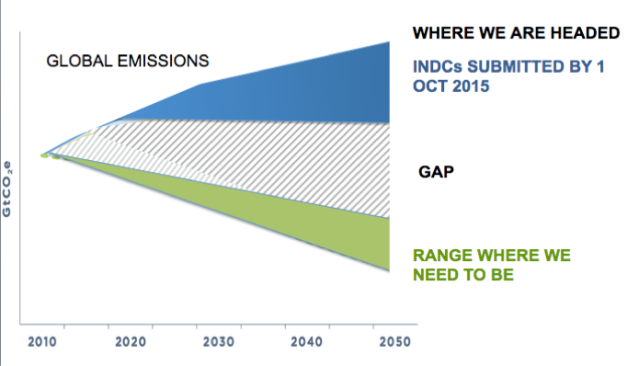 Figure 1 Effect of INDCs on GHG global targets and the gap. Not to scale, roughly representative of relative magnitudes. Adapted from Advancing Climate Ambition: Cities as Partners in Global Climate Action (2015).

City actions to reduce emissions could help to reduce this gap. Why cities? Because cities have policy jurisdiction in areas nations do not, and urban areas are responsible for large GHG emissions. In 2009, the number of people living in urban areas exceeded those in rural areas. Today, cities, with only 2% of the global land area, cause 70% of GHG emissions globally. By 2050, two-thirds of the world’s population will be living in cities. At this rate, the role of cities to reduce GHGs will increase even further. A report by Michael Bloomberg, former mayor of New York City and the U.N. Secretary General’s Special Envoy for Cities and Climate Change shows the potential that city actions from around the world can have (Figure 2).

Therefore in this COP, and more than in any other COP before, cities will be heavily represented and there will be attempts to give cities a “united policy.”

As can be seen in Figure 2, since there is yet a remaining gap, it is not about competition between nations and subnational entities, but rather about working together to provide more GHG reductions at subnational levels than can be agreed upon at the national level. For federal nations, there will certainly be additional reductions from state policies that are not accounted for in the INDCs. Still, cities in California, as in other regions and countries, have a significant role to play in those areas where they have jurisdiction, namely reducing waste streams and increasing and recycling, implementing building efficiency codes that go beyond state and national standards, enabling alternative local and distributed energy supply systems, implementing water conservation goals and water system efficiencies and most importantly, due to unique land use jurisdiction, transportation planning. Urban planning that reduces travel demand, policies that enable mode shifts away from single use vehicles, improvements in transportation system efficiencies, and increased vehicle electrification, are some of the most important ways in which cities can help achieve GHG reductions.

For more analyses on INDCs and our regional cities’ climate action planning efforts, follow this blog over the next few weeks.

Dr. Nilmini Silva-Send is EPIC’s Assistant Director, Adjunct Professor, and the C. Hugh Friedman Fellow in Energy Law and Policy. She leads the regional and local climate change projects and has extensive policy and technical knowledge about energy and GHG mitigation methods and measures. She has participated in several international energy policy dialogues, including in Mexico and Saudi Arabia. Dr. Silva-Send has been a co-Principal Investigator in a recent multidisciplinary National Science Foundation funded climate education project in which she worked with climate scientists, social psychologists and communication specialists to develop more effective methods to communicate links between climate science, energy use and society. During her career Dr. Silva-Send has conducted legal and technical analysis of environmental laws in Europe and the U.S., and carried out environmental due diligence assessments in Europe. She has also taught upper level and graduate level international law courses in Germany and since 2004 at the University of San Diego School of Law, where from 2009 she developed and teaches a contemporary course in International Energy Law. Dr. Silva-Send has a B.S. in Chemistry and a PhD in International Law and Policy. She is a member of the International Bar Association.
View all posts by Dr. Nilmini Silva-Send →
This entry was posted in Greenhouse Gas, Legislation, Renewable Energy, Transportation and tagged Climate Change Convention, Greenhouse Gas. Bookmark the permalink.